Pieces of Our Past

From it’s humble beginnings in 1769 until today, Bluemont has undergone many changes. As the decades pass, visitors and residents alike enjoy its rich history, heritage and easy living. 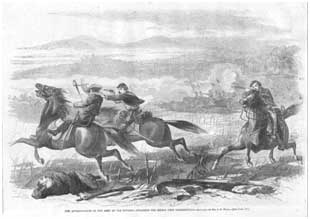 In 1769, the land on which our village lies was conveyed to John Augustine Washington, half-brother of George Washington, from George Carter who had received a land patent from Lord Fairfax. Washington, in turn, conveyed 624 acres to Edward Snickers. Snickers sold to Richard Wistar of Philadelphia in 1777, and Wistar sold to William Clayton, whose son, Amos Clayton, built splendid Clayton Hall at the side of the Snickersville Turnpike in 1797.

In 1807, when Snickers operated a ferry across the Shenandoah River, the area was called Snickers Gap. The settlement became known as Snickersville as an act of the Virginia General Assembly in 1826. In 1853, Snickersville contained “fifteen dwelling houses, one house of public worship, one common school, one Masonic hall, two factories, one tailor, one wagon maker, three blacksmiths, and one copper and tin plate worker.”

During the Civil War, Snickers Gap was a strategic pathway between the much fought over Shenandoah Valley and Union occupied Northern Virginia. Both armies traveled back and forth using Snickers Gap. When the Civil War descended, a skirmish occurred right in the village when the Yankees, in search of some good home cooking, met up with a Confederate band. The “Battle of Snickersville,” October 22, 1862 was made known to the nation through an illustration in Harper’s Magazine: “The Advance-Guard of the Army of the Potomac Attacking the Rebels Near Snickersville.” The dramatic print shows two Union cavalrymen in the foreground chasing a rebel on horseback

Recorded the details of this clash, which resulted in four Union killed, two wounded, and 10 taken prisoner; three Confederate killed and one wounded. 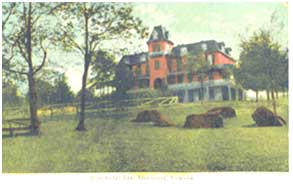 The Resort Era began in 1893 with the building of the Blue Ridge Inn near Bears Den Rock. Built by Washington businessman Jules Demonet and financially aided by William Lynn of Airmont. The Inn was a popular location for wealthy Washingtonians to escape the heat of the city. Before the railway arrived the most common way for people to travel in and out of the town was by one of two major roads located in the area. These roads were at present day Route 734 and Route 760. Route 734 traveled from Snickers Gap to Aldie and Route 760 connected Bluemont with Route 7.

In 1900, as Snickersville was already developing a reputation for hosting summer visitors, the Southern Railroad (later called the Washington & Old Dominion) extended its tracks west from Round Hill, with funding provided by Southern’s owner, J.P. Morgan. The first train came into the village on July 4.  Soon after the name  of Snickersville was changed to Bluemont,  it was thought to sound more appealing to visitors. The train making the trip to the last stop on the line was called “The Virginia Creeper”, due to the length of time and number of stops made along the way.

The Village prospered over the next years. Between 1900 and 1905, the E.E. Lake Store was built to accommodate an ice cream parlor, a general store, a barber shop, the post office, and a meeting and dance hall upstairs. A branch of the Loudoun National Bank of Leesburg operated out of EE Lake for a while, but closed after robbers opened the safe with explosives in 1907.Two other stores selling general merchandise, a millinery, a livery stable, three hotels, boarding houses, along with blacksmiths, wheelwrights, carpenters and a harness shop serviced our village. Two physicians and a dentist hung their shingle in the village as well. Buggy rides transported visitors to Bear’s Den to view the valley. Drummers [traveling salesmen] took meals at Mrs. Weadon’s: fried chicken, country ham, fresh vegetables, hot rolls, pies, and buttermilk or sweet milk—all for 50 cents.

Bluemont thrived for many years. 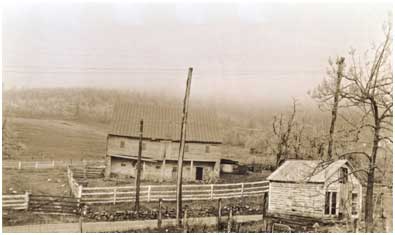 Not So Long Ago

Over the next few years’ things changed for the Village. The Blue Ridge Inn burned to the ground in 1912 and the railway stopped its Bluemont operations in 1939. Once considered a thriving destination for the Washington wealthy, Bluemont now prospers from it’s fertile fields and agricultural resources.

Farming diversified, as corn replaced wheat as the main crop, and the dairy and beef industries gained importance.  In 1945, there were 2,015 farms in Loudoun County.Between 1909 and 1944, the whole milk production of Loudoun farmers increased more 1,200%, from 4.4 million pounds to 56.3 million pounds.

Bluemont was still a weekend destination for some and many others decided to make this quaint village home. Those that did formed the Bluemont Citizens Association, it was organized in 1955 and the Bluemont Fair in 1969 to celebrate these eras of our history.

Today, Bluemont has found a share of prosperity.  The village contains a mixture of lovely old homes, historic buildings, former schoolhouses, and a number of active businesses. The surrounding neighborhood stretches across the crest of the Blue Ridge (including a length of the Appalachian Trail) and down to the Shenandoah River. An industrious, innovative people, Bluemonters appreciate the contributions of those who found life close to idyllic here at the foot of the Blue Ridge.