The backbone of this tour of a Virginia village is the historic Snickersville Turnpike, authorized by the Virginia General Assembly in 1809, built and managed by the Snicker’s Gap Turnpike Company. It was the nation’s first operating toll road–admired by Thomas Jefferson as a key investment in the new nation’s infrastructure.

Snickersville Turnpike, Snickers Gap, and Snickersville (the village we now call Bluemont) all took their names from Edward Snickers (probably a corruption of Dutch name, “Snygert”). Edward Snickers was a French and Indian War veteran who operated an inn and ferryboat concession on the Shenandoah River.

A young surveyor named George Washington recorded in his diary that he stopped there August 11, 1769, for “baiting” [fishing], on the way home from a trip to Charles Town.

(Links to web sites are provided when available.  SOME BUILDINGS MENTIONED BELOW ARE PRIVATE RESIDENCES.)

Served as a church until 1851 and as a school through the Civil War, when skirmishes were fought just a stone’s throw away on the turnpike. Original tuition was $3 per semester. The quarter-acre of land was donated by Elizabeth and Amos Clayton (son of village founder William Clayton).

…”Amos Clayton for a consideration of one dollar to him in hand paid by the said trustees, the receipt whereof & hereby acknowledges hath granted, bargained, alloted and by these presents doth grant, bargain, & sell unto the said Robert Chew, William Bradfield, Timothy Carrington, William Woodford & Townsend Clayton trustees aforesaid & their successors for the purpose of building a house for a public school & place of divine worship (but to be put to no other use) a certain lot or parcel of ground lying & being on the South East side of the Blue Ridge, and on the South side of Snickersville… “

William Bradfield’s daughter Lucy Ann, who was eight years old in 1825, expressed her gratitude for the schoolhouse in her elaborate “Snickersville Academy Sampler,” dated 1826.

Having received the log structure and its small plot as a gift from the Hatcher Family in 2010, Bluemont Heritage, a nonprofit local historical association restored the Snickersville Academy with the help of many generous donations and community support.

2. Carrington House (~1820)
Timothy and Margaret Carrington bought the lot from Amos’ sister, Martha Clayton, and built the house. Tradition has it that, during the Civil War, both Colonel Mosby’s rangers and Union troops stopped in this tavern for refreshment–not at the same moment, of course.
33679 Snickersville Turnpike
A PRIVATE RESIDENCE

3. Clayton Hall (~1797)
Built by William Clayton, who first invisioned and plotted off the village of Snickers Gap (later called Snickersville and, still later, Bluemont) in this spot. In 1792, William Clayton purchased 624 acres of land from the estate of Richard Wistar of Philadelphia, who had bought it from Edward Snickers in 1777.
18323 Clayton Hall Rd
A PRIVATE RESIDENCE

4. Bluemont General Store (~1846)
Offers fresh eggs and milk; chocolate pebbles; sundries and necessities; sandwiches, soup, chili, and ice cream. This store has been in more or less continuous operation for a century and a half. Featured in the film, “Crazy Like a Fox”.
33715 Snickersville Turnpike

5. Old Dance Hall (1922)
Served as the social meeting place of the village.  Now the location of offices and retreat center for Boulder Crest Foundation.
33735 Snickersville Turnpike

6. E.E. Lake Store (~1901)
This building, or portions of it, has served many roles through the decades: general store, Bluemont’s first post office, bank, ice cream parlor, meeting hall and dance hall.  After sitting essentially idle for 80 years, the building was re-opened in 2018 after renovations done in a partnership with Loudoun County and the Friends of Bluemont.  Today the building houses The Plaster Museum of Bluemont Heritage.  The center portion contains the only general store space in Virginia that has not been remodeled/renovated since its original construction.  The building is used during the Bluemont Fair and in recent years has hosted farmer markets and Irish dance classes.
Corner Railroad Street & Snickersville Turnpike

7. Bluemont Mill & Railway Museum (train operated 1900-1938)
This early 1900s mill has been built taller to function as a cell phone tower.  A replica of the Bluemont train station sits at the foot. Bluemont was long the terminus of the Washington and Old Dominion Railway (W&OD). In the 1950s the train tracks were taken up and sold; the original station building was dismantled and repurposed as three small houses. Visit the informative historical marker.  The original passenger station was on the east side of Railroad Street, approximately 30 yards north of Snickersville Turnpike.
18292 Railroad Street

10. Bluemont Community Center (1921)
The building that is now the Bluemont Community Center housed the Bluemont School (1921-1962). It was built through the help of a donation of land and $5,000 from Dr. Rufus Humphrey to the Loudoun County School Board. It became the third school house. The building served as a “New England” high school in a scene that was filmed here for a West Wing TV episode.
33846 Snickersville Turnpike

11. Whitehall Estate & Winery (~1787)
This classic, southern, white-columned, plantation-style building is the oldest home in the village. Today it is a setting for weddings and elegant events. 18341 Whitehall Estate Road

Points of Interest Near the Village – Drive to These Sites: 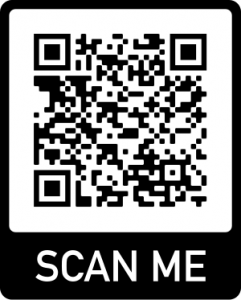 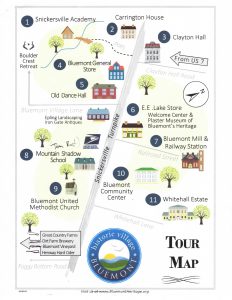