My Home on the Ridge

When I received a membership renewal this January from Friends of Bluemont along with a letter asking for stories about “your house” I was intrigued.  Through the years that I’ve lived in my home, I ha 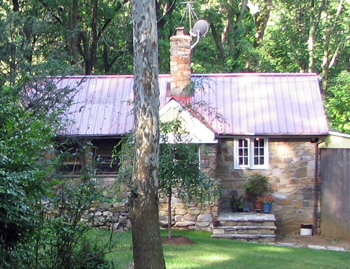 ve heard many stories about the house and Ralph Baxter, the man who built it.  Many came from the surrounding neighbors – a few were in-laws of the builder, plus some tales from others who may have embellished somewhat. Most of these stories I can share.  Some I need to censor.

I am also seeking any old pictures of my place or structures, or stories that have to do with its builder.

My home is located at 19055 Blue Ridge Mountain Road.  It is the small stone cottage, two miles (on the west side) from Route 7 and just past Foxglove (B. Johnson).  There is a stone mailbox right on the road.

I bought the house in 1998.  Over the years I have cut down more trees than I can remember, made some changes, mostly minor, to the property.  The basic structure of the house, for the most part, remains as Ralph built it, with the exception of the front foyer entrance, which I added.  But instead of going into the details of what I removed or changed, let me get to the heart of the story of just how this beautiful little building came to be.

My main source of information has been Alan Demmerle, truly a great friend and former neighbor who built the house next to me, towards the south.  Alan has been the provider of many Ralph stories, as well as many other stories regarding this mountain.  He has been coming to the mountain since the 1940s and we keep in touch.

As I understand it, my house was built by Ralph Baxter and completed in 1955.  Ironically, 1955 was the year I was born – so maybe some sort of psychic linkage thing was going on back then.  It is my impression that Ralph had been in this area, or round-about the mountain from the late 1920s or 1930s.  Alan, who met him in the early 1940s, says that at this time Ralph already knew the mountain very well.  Ralph was caretaker to a pr 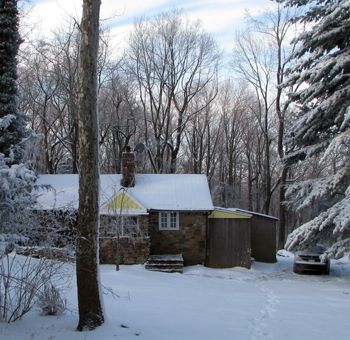 operty of about 200 acres known as Ben Lomond, owned by a Baltimore businessman named William J. Mann. Mr. Mann would visit the mountain from time to time, likely on weekends to enjoy that legendary Blue Ridge tranquility that city life could not provide.

I believe Alan’s father knew Mr. Mann through employment, and on occasion the Manns would invite Alan and/or the family to the mountain on weekends.  This is where Alan and Ralph met, and these events likely provided the “lure” of the Blue Ridge that we all hear so much about, for Alan to later come to live on the mountain! Alan eventually bought property just a few hundred yards from Ralph’sand built a home here, completing it, I believe, in the late 1950s.

Ralph Baxter was a great hunter who knew the mountain very well.  He was well liked by Mr. Mann and the many people he associated with.  I know Alan thought very highly of Ralph and they spent a lot of time together, some of it hunting and some just talking. This relationship no doubt has provided many a ‘Ralph story’ for me over the years that I’ve known Alan.

Ralph had a brother in the armed services, who served in World War II. Ralph’s brother, I assume, much like Ralph, loved hunting as well as guns.  So why let opportunities (of all these guns) pass you by?  Slowly but surely, Ralph’s brother began to send back gun parts for his brother to build a rifle.  In fact, Ralph made several custom rifles. I’m sure this special talent and knowledge may have inspired the brothers to use this U.S. government property to protect and prosper and, on occasion, if need be, to shoot that squirrel running across your place or anything else that happened to cross it.  Mr. Mann loved hunting with Ralph, who seemed to know all the best locations for tracking any kind of game.  Ralph, with his custom rifles, his knowledge of the mountain, and great shooting accuracy, must have been a wonderful companion for the sport.  Mr. Mann apparently always envied the sure-shot talent that Ralph possessed as well as his remarkable custom rifles.

Ralph Baxter was a man with a variety of working situations.  He made a living as caretaker for Mr. Mann, and also served as caretaker for a few other properties within Clarke and Loudoun counties and surrounding areas.  For many years Ralph lived on the Mann property, without owning a home of his own.  Apparently, as time and relationships evolved, Mr. Mann became determined that Ralph should have a home of his own, some land, and a place to raise his family.  However, as Alan puts it, Mr. Mann knew Ralph well enough to be sure that he would not take something for free.  So although it is likely that Mr. Mann would have been more than pleased to part with some of his property to a person who was trustworthy as both caretaker and friend – making an outright gift was not the way to go about it, or one that Ralph would have accepted.

There was however, one special rifle that Ralph never seemed to miss with, a weapon that Mr. Mann really liked!  Apparently, this was an offer that Ralph could not refuse – 13 acres in exchange for a sure-shot, custom rifle!  What a deal!

Sadly Ralph passed away in the 1960’s.  His wife Georgia lived here for several more years, sold some of the acreage which is now part of the Davit property.  What remains is 4.6 acres which is mostly wooded.  It is my understanding that the property was sold three times since being built, and including the Baxter’s, I am the forth owner.

I have been told that this was the first stone house Ralph had ever built.  Apparently he went on to build others structures, such as the Davit house and one of Baker Johnson’s fireplace.  There were also other buildings, especially for Mr. Mann; likely stables, barns and, I’m sure, stone walls, but this house was likely his first major undertaking.  Several weeks ago I asked Alan where most of the stones came from. I noticed that they didn’t seem as if the stones for this house were local to the mountain, so I was curious.  I also wanted to try and match the ones I was using to face the small entry foyer I built.  According to Alan, 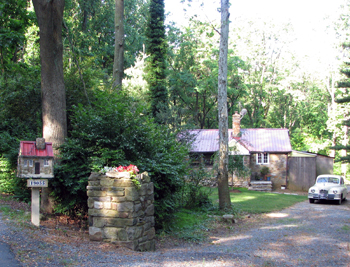 Ralph worked on a farm in Round Hill.  This farm was going through much clearing and construction, and Ralph would bring stones up to the mountain whenever he had the opportunity to.

This little cottage housed Ralph and his wife as well as a daughter.  It seems as if the house originally had an oil furnace, though I can only surmise this by some old footings I can see on the rear of the house.  This furnace offered nothingbut a radiant heat that would rise through a grated opening or open door that separated the basement from the first floor.  In time, I know, a wood burning stove was used, and afterwards, baseboard electric heat was added, which is still in use today.  The house remains small, but workable for me, as I have been here going on 11+ years now.  My home is small and well suited for a bachelor, but I could not imagine living here with a wife and daughter.

According to Alan the road earlier known as Rural Route 1, and later as Route 601, still might have been unpaved in the 1950s.  I’m sure it was quiet here, to say the least.  Now unfortunately, I find that Ralph built this house – or maybe it is more accurate to say I bought a house – a little too close to a road that was going to become an active thoroughfare for FEMA, serve several new homes, delight sightseers (which seem the least intrusive), and of course act as a shortcut to Route 50.  All and all, I love it up here and intend on staying a long time.  I look forward to keeping the house and property in sync with the rest of the beautiful older properties up here.

I am looking for old pictures of my place or any other structures that have to do with its builder, Ralph Baxter.  Feel free to stop by and say hello, or send me a message at ptaylor@aacba.net or through this website (BluemontVA).